Today, we're going on an adventure! I have a membership to the Museum of Fine Arts in Boston and today I'm taking my nieces.  My boys LOVE the museum! Since my nieces are on school vacation this week, I thought it would be a fun thing to do with them.  So my younger son & I are going with my sister and the girls.

To celebrate their first trip to an art museum, I made this little paper doll set. 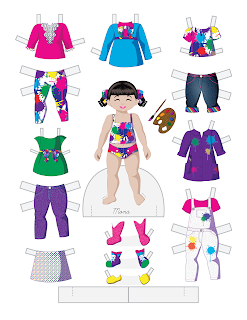 If you're looking to expand your mix & match options, Amy's wardrobe would work well.  Most of the colors are the same.

Enjoy your Friday! I know we will :)

It's easy to look at these sets and think they aren't very beach-y.  And that's somewhat true.  I have this grand vision consisting of a limited palette, nautical motifs, and beach backgrounds.  Once it comes together, I think it'll be more obvious. 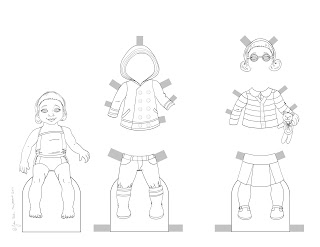 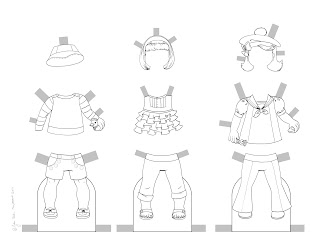 Right-click to save & print

Part of the reason these sets don't look all that nautical is because they are missing color and pattern. I find that it's become so much more efficient to create patterns separately and add them in later, even when I work with traditional media.

I'll be fleshing out this set and coloring it in the next few weeks.  Let me know what you think of these preview black & white sets!

Posted by Julie Allen Matthews at 8:02 AM 2 comments:

We're on vacation this week and we've been busy! Not only have the boys & I visited family but we've had time to do other fun stuff, too.  One thing we do as often as we can is visit the Museum of Fine Arts in Boston.  And the boys love it!  If you're anywhere near Boston, go check it out.  We really have a blast there.

Since it's vacation, I haven't had much time to do paper doll related stuff.  This doll is a bit of a quickie.  And more plaid! 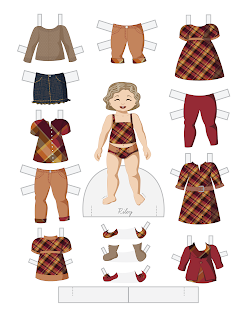 This set is based on Ruby. Aside from that & the fact that it's lots of plaid (again) I don't have much to say.  I like the colors, I like the plaid, but I'll see if I can change it up a bit next week!

Last week I shared a two-page set of the beach paper dolls at the end of the tutorial.  This week, I've decided to share another set. 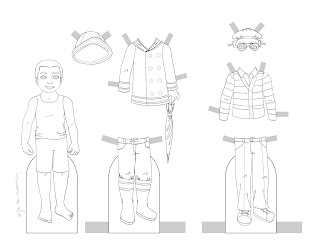 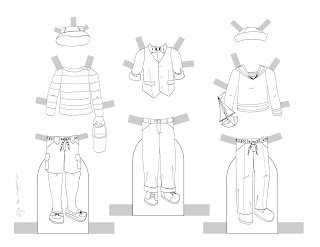 Today I have two pages of the boy set to print and color.  Creating a paper doll set takes a lot of time.  I wish I could keep a nice, orderly pace and just get it done. That's just not going to happen! I'm still outlining the toddler girl set.  After that, I need to determine how many other pages I need to round out the book.  Then it's on to coloring.

If you missed out on the older girl black & white set from last week, you can grab it here.

Five days later, I'm still having book hangover! It's very much an adult read, but seriously, the Outlander books are a lot of fun to read.  If I owned the set, I would sit down and read them all straight through.  And get nothing else done! Thankfully, I'm waiting for book 4 from the library so I have some time for creative pursuits. 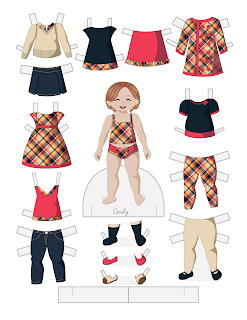 Today's toddler is based on Cecilia. The plaid jacket is supposed to be a raincoat. I probably should have added a sheen or something to it.  I love that plaid so much that I can't hide it under a shiny gradient! Aside from that, there isn't a whole lot to say about this one.

I'm still slowly picking away at the beach set.  It's been a bit hectic around here lately! For those of you having spring vacation next week (like our school is), have fun!

Making of Mondays: Outlining the Outfits

I've been a bit slow working on this project.  I'd like to say there's a good reason for it, but really, there isn't.  We've been visiting with family and I've been pretty involved in the Outlander book series.  It's one of those book series that I want to read all of, all at once, til there's no more to read and then I go into a post-reading, world collapsing funk.  I love it! And the TV series is beautiful, too. If I can get the motivation, I just might make a paper doll.  No promises, though.

Anyway, part of the reason I've been putting this paper doll series off is because I've had to redraw the baby.  I wanted to share the outlines of all three dolls but it just didn't work that way.  Regardless, I use the same process on all three sets so really, if you're seen the process for one, you've seen it all. 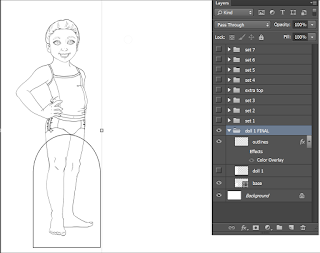 These dolls are being outlined in Photoshop.  One thing I love about Photoshop is groups.  I use groups in Illustrator and groups in Photoshop are essentially the same thing.  In Photoshop, a group is a little folder filled with layers.  Once the layers are grouped, I can interact with them together.  I can move the whole group, change opacity, etc.  AND I can interact with each individual layer.  When I create a paper doll in Photoshop like this, I try to do a rough fit and then draw in a new layer over the sketch.  The image above shows this. Within the Doll 1 group I have three layers: the bottom layer is a shape layer with the base shape, the middle (hidden) layer is the sketch, and the top layer is the outlines layer with a color effect (hidden). When I draw the outfits, I lower the opacity of the whole group, with the color effects on, and draw on top of it. 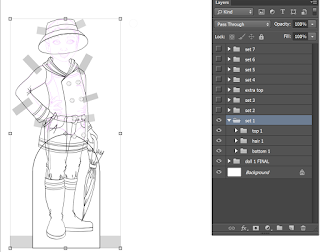 Here's a screen shot of the first outfit.  I have three separate within this group.  It sounds far more confusing than it is to group things like this.  In the long run, it really makes this much easier, particularly when coloring the images.  In this image, I have a faint image of the doll (that's the Doll 1 group with a lowered opacity), and then a group for each part of this outfit.

I want this set to be mix & match but I also want to make sure that everything fits together, both visually and technically.  I hate bad fit on paper dolls and it's happened in my own projects too many times! 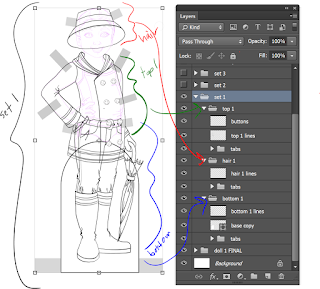 I try to fit & outline all of the outfits in a set in one file.  Sometimes it gets too big and I have to split it up, but usually it works out.  I only do this with outlines.  Coloring the outfits creates HUGE files, so I manage those a bit differently.

In the image above, I've made some notes about my layers.  Think of it like an outline for a paper.  There's Set 1 which is the overall group.  Within that, there's the Bottom 1 group which had the base shape, an outline layer, and a group folder with the tab shapes.  Then there's the Top 1 group and the Hair 1 group.  I try to name everything very carefully.  It gets really chaotic if I don't!

Sometimes, there are elements I like to group together instead of flattening them into one layer.  The buttons in this set are a good example of that.  I tend to flatten things as little as possible.  I like the flexibility of mixing things up and coloring & recoloring them later on.

I still have a lot of work to do on this set.  The baby doll is a bit behind.  The older girl & the boy set are both coming along well. Once I complete the baby set, I'll test the layout and see how many more outfits I want to add to the set.

In the meantime, test out a 2 page paper doll set! 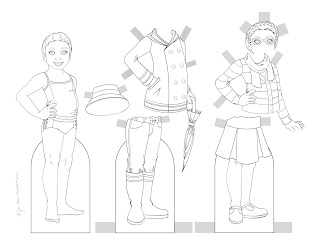 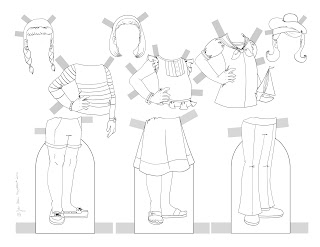 Right-click & save the images to print & color them.  This is just a small set of the outfits for the older doll.  There will be a lot more in the completed project. I'll create little sets like this throughout the project.  Feel free to let me know what you think of the set!

Posted by Julie Allen Matthews at 10:11 AM 2 comments:

Today's toddler gets us back on track with revisiting previous dolls.  This set is based on Sonia, from 2013.  I'll post toddlers on Fridays until I have my preteen doll ready.  That might be a while...!

As for the Monday posts, I'm hoping to resume that on Monday.  I had to redraw one of the dolls and it's had an impact on my progress.  Frustration is just part of the creative process, right?! 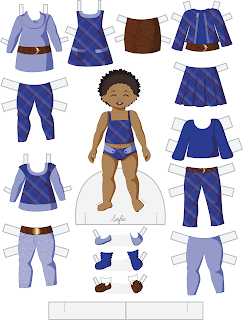 I don't have a lot to say about this set.  I like the colors and tried to unify the set with rounded necklines.  I need to find some more toddler fashion inspiration!

Happy April! I thought I'd start the month off with something fun.  My boys are starting to tell jokes & try to pull minor pranks.  They are super excited that today is April Fool's Day.  In honor of this, I made a clown paper doll. 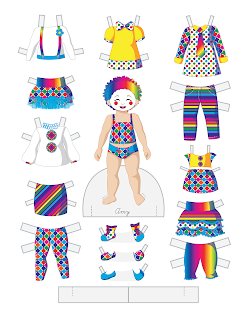 I'm pretty ambivalent about clowns.  Some people love them. Some are terrified.  I really just don't have an opinion.  With this set, I wanted a super cute clown.  I created some patterns specifically for this and I also wanted bright, rainbow colors.  And the hair had to big and bright!  At the last minute, I also added the white face & bright cheeks. Ultimately, I think that was a good choice.

I happen to love this.  I might make a boy version of this -- my sons have taken an interest in paper dolls but they really prefer the boy ones.  I think I can manage that!

Hopefully I'll have another installment of "Making of Mondays" this week.  That series is really keeping me on task with a paper doll set that I'm not overly enthusiastic about.  I think I'll get excited about it again.... Til then, enjoy this little clown paper doll!

Posted by Julie Allen Matthews at 5:00 AM 4 comments: 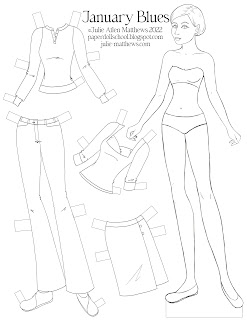